While Japan struggles to combat it’s increasingly ageing population, the recent Pakistani census sheds light on vistas of potential opportunities that stem from the fact that Pakistan currently holds the largest youth population in it’s history. The chessboard can not be set in a more favorable way; a developing country on the cusp of engaging in an incredibly ambitious international economic programme has a large number of citizens entering the workforce.

As the nation currently holds it’s breath in anticipation of the upcoming peaceful transfer of power, tensions are running high and political agendas are being critically evaluated. Matters of defense, economy, and institutional capacity are being argued upon and rightly so. The global balance of power is currently undergoing a particularly dynamic period of turmoil and it is imperative to leverage assets for the greater good.

One of the fundamental ingredients that helps amalgamate, catalyse, and sharpen the efforts towards that aforementioned ‘greater good’ is education. Many Pakistanis strive to derive much of their identity from educational institutions that arm them with the needed weapons for financial inclusion, economic prosperity, and critical thinking.

Sadly, Pakistan has a well-evidenced history of education taking the backseat, causing a massive brain drain where the same ‘young nation’ seeks opportunities abroad. Many public educational institutions are shrouded in incompetency, and mismanagement, leading to higher drop-out rates. On the other hand, the private sector has breathed a curriculum that is steeped in consumerist tendencies, with profit driving most decisions made.

An Alif Ailaan Contributor
A good teacher makes a difference
Eman Fatima is a grade one student and lives in Mauza Imamu Arayein, Ahmedpur East. “I like the school. In

Through out these dynamic times, there have been a few like minded individuals that have identified, emphasized, and committed themselves to driving social impact through campaigning religiously for educational reforms. As a young, educated Pakistani, it is uplifting to witness organisations like Alif Ailaan build bridges through the destruction of barriers and bring titans of different, often opposing industries, to one table.

The fundamental operative concept behind democracy is kaizen: perpetual evolution and improvement. The national discourse has shifted from terrorism to child abuse, corruption, and the fate of the national political arena. This shift in trends stands as a testament to the maturity of discourse that the nation engages in.

Taleem Do! is an ambitious project, a desperately needed movement, and a beautifully positioned campaign that will usher the next chapter of national discourse: education. With low, and uneven literacy rates, education needs to be a categorical imperative on both a microscopic and a macroscopic level. While each and every individual has a duty to advocate for educational reforms, Taleem Do! has also managed to raise this issue on a macroscopic level by involving pledges from every major political player before the upcoming General Elections.

Strong men create good times, good times create weak men, Weak men create hard times, and hard times create strong men. Pakistan has, unfortunately, seen terrorism, extremism, and war plague her for decades. However, the country is currently at the cusp of blossoming into a major developing country and these hard times need to fuel the creation of strong men who can create good times once again. And the only way to do that is to redouble our efforts on educational reforms. 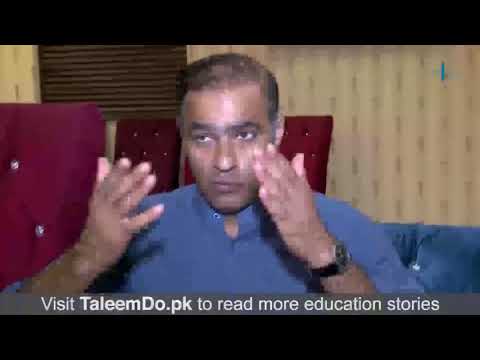