It is no secret that a country’s education infrastructure provides perhaps one of the most important pathways to economic and social development. Not only is education a fundamental human right, it also serves to enlighten and empower us so that we may live fulfilling lives while propelling society towards growth. This begs the question – why has the previous government in Sindh neglected to genuinely improve state schools and education system? More importantly – what must be done to rectify this deplorable lack of commitment?

There are many answers to this question – however, one way that has been shown to be effective is implementing change at a grassroots level: through liaising with schools and identifying the particular needs of each. This can be seen in action in the NA 247 constituency, where a dedicated team of individuals from the Insaf Community Welfare Society (ICWS) have been working towards restoring both physical infrastructure and improving the quality of schooling provided. The ICWS is supported and backed by ex MNA Dr. Arif Alvi and ex MPA Samar Ali Khan. Currently, the constituency consists of 17 buildings – which house a total of 52 schools. The members of the ICWS initially reached out to the government to work together – however, eventually a lack of cooperation left the ICWS and Constituency Legislators no choice but to continue their work using their own funds in 37 Schools.

The flagship school of the NA 247 education campaign – led by PTI MNA and MPA  – is the Railway School located in the Railway Colony, Kalapul. This school was taken as an NA250 project and has been fully renovated. Dr Arif Alvi’s wife Samina Alvi took ownership for raising Funds through generous donors and personal funds from the MNAs and MPAs of NA250 to make structural improvements to its interior as well as the exterior.  The efforts resulted in increased enrolment with a current strength of 1,400 plus students.

An Alif Ailaan Contributor
Searing heat and poor facilities
Noor Hassan lives in Chak No 129 DB, Bahawalpur. He runs a small “Karyana (provision) Store” in the village. He says: “The

Rabia Azfar, member of PTI and ICWS took ownership of the two Government Schools in Dr Arif Alvi’s constituency. Qamar ul Islam School in Punjab Colony and Pak Jamhooria in Defence Market. With the help of donors, the ICWS was also able to rehabilitate the Qamar ul Islam school’s science lab which allowed for students to gain a more comprehensive understanding of the science curriculum – a crucial building block of any secondary education. Primary section was renovated and furnished to make children sit on desks instead of the floor, electrical work was done to provide light and fan in classrooms, clean drinking water was arranged and teachers were provided teaching aids and  early childhood learning.

She alongwith with her team, introduced qualified remedial teachers to the Qamar Ul Islam High School located in Punjab Colony. This February, a remedial teacher with more than 20 years of experience internationally and locally joined the Qamar ul Islam School.

The Jamshed Ahmed School (Hijrat Colony) was upgraded to offer matriculation with both science and arts subjects. With the help of many donors and the guidance of Dr Arif Alvi and Samar Ali Khan, a fully operational science lab was built and handed over to the school. Similar work has been carried out in other schools, such as the Baldia Uzma School (Kalapul), Najeeb Shaheed School (Tekri Colony), Rahat Islamia School (Qayyumabad), Rizwan School (Qayumabad) and Pak Colony School (Qayumabad).

Whatever has been done over the past 5 years in the constituency to improve the learning environment is not sustainable if we do not give these individuals the power and authority they need to address the education crisis. Keeping in mind the milestones that they have achieved over the past few years, it seems as though they have rightfully deserved our trust. This time Vote for Education 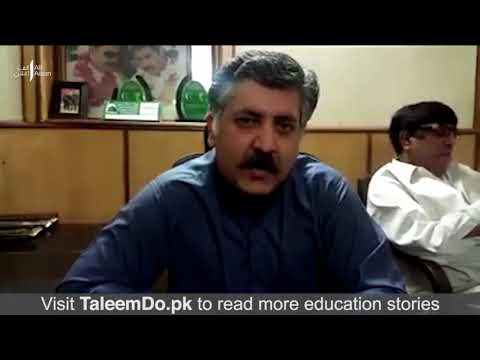 Language — conundrum in our education

Celebrated novelist explains how his school failed all but few