Learning mathematics is not as difficult as it is considered by so many of us but we cannot say it’s easy either. It demands a great deal of concentration, conception and practice. Most of the students, in our context, develop anxiety, stress and fear while hearing the word “mathematics”. It is just because of the way mathematics is being taught to students in our country. We usually do not teach them how to learn mathematics rather we impose it on them.

It results in lack of conceptual understanding, procedural fluency and interest among students. In order to facilitate true learning of mathematics and to reduce mathematics anxiety among young students, initiatives like Math-a-thon are breaking the stereotypical teaching methodologies. Math-a-thons engage students from universities and schools to transform math into a fun game, thus encouraging students to solve a large number of problems in an entertaining environment.

Math-a-thon is a one-day competition held in universities across the country aimed at linking mathematics concepts taught in school with local games. I participated in the competition when the call for registration was announced at IBA-Sukkur. I was delighted to hear the name of the competition. However, I was a little scared too as I assumed it meant a lot of mathematical expertise and that someone outstanding with mathematics should participate.

I had a discussion with my professor regarding the nature of the competition and he explained how the competition was not going to test the participants’ mathematics skill but rather help them make mathematics easier to understand. Being a student of the education department, coming up with a way to teach mathematics with games was an intriguing opportunity and hence I registered for the competition along with my fellow students.

As part of the competition, the teams were given a task to plan teaching strategies involving games, and as the instructions said local games were preferred. The purpose of this interactive, joyful event was not only to make the teaching and learning experience of mathematic fun but to bring innovativeness into teaching of mathematics and bridge the gap between university and school students. Each team was made to work with school students (grade 8 and grade 9). It was probably the first time those students had ever visited a university. They seemed confused and overwhelmed at the beginning, but as the orientation started, they also started to look relaxed and comfortable.

After the initial ice-breaking session, we established a strong rapport with our school student counterparts and then began planning on the strategies through which we had to teach. As we were earlier informed about event requirements, we bought along board games ourselves which not only helped us in the competition but we also proved to be a useful stress reliever while planning strategies. As I am studying in B.Ed. and am also a teacher, so participating in this competition, as a teacher, I was able to explore diversified, hands-on-minds-on games related to mathematics. Moreover, listening to the ideas of other teams who participated in competition aided me in my understanding towards teaching many concepts of mathematics through introducing the element of fun.

Shabana Mahfooz
Learning at crossroads!
The teachers need to be trained adequately and skilled properly

This competition taught me to think out of the box while teaching students – to come up with teaching methodologies that spark the interest of the students in the subject or the lesson being taught as this is the only way to truly ensure that the student has learned the concept and is not just rote-learning topics or exercises from the mathematics textbooks. That was the day I made a commitment to incorporate such innovative ideas in my classroom.

Our team worked hard together to make sure we win the competition. Every member was assigned a particular task, after planning and discussion with the team, to complete. I worked as the resource provider and manager making sure we had support material for the presentation. My entire team was enthusiastic and passionate towards work which was the key to our success.

We linked five games for teaching mathematic which included ludo, darts, tug of war and jumble game. The idea which got us the win was how to teach addition with the help of ludo. During the presentation, our team members played ludo for a while and explained how through each throw of the dice, the student is learning addition.

The best part of the competition was being with the school students in our team. They were fully involved and interested in the competition. Their ideas and feedback on the games we were proposing stunned me at first as I was not expecting them to be as responsive. However, their strong involvement during the conception of ideas was highly beneficial to the entire team. And I could tell, they were enjoying the whole experience. They were enthusiastic and they wanted to a part of everything we did. Since the students played games after school in their mohalla (neighbourhood), they could associate with the proposed games easily whether it was an indoor game or an outdoor physical game. It was a productive experience which commenced a new way of teaching and learning mathematics. This was majorly one of the reasons why we were able to have a smooth final pitch.

These type of competitions in which games are being incorporated facilitate learning to a large extent. The very reason is when children hear the word ‘game’ they instinctively become elated and involved. In addition to helping students engage in the games, the idea that they are playing a game triggers and increases their mind’s ability for doing interesting things. That in turn helps students solve math problems more effectively and efficiently. Therefore, these type of events must be held to give students some motivation and fascination towards learning and capacity building. It also aids in reducing mathematics anxiety and fear by introducing the element of productive fun.

The writer is currently studying in Sukkur IBA University, Sukkur, Sindh, in the Department of Education. He is from district Umerkot.

Salvaging the situation is not a one-organisation job 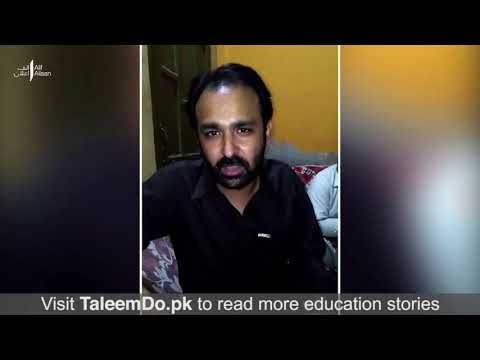 Only revised curriculum can serve as a positive agent of learning