Most of the boys who went to Government Primary School for Boys in my village dropped out after class three or four. It wasn’t their fault really. It wasn’t our school teachers’ fault either. They were mostly nice and hard working and kind but most of the students didn’t understand the language that we were being taught in. We had heard Urdu on radio but nobody around us spoke it. It was a frightening experience. Imagine the terror of a first generation school goer, the first one in the family to wear a uniform, to prepare his takhti and qalam and go to school. Now imagine these kids being taught in a language that was completely alien to them. A five-year-old has some knowledge of the world, he can name things that he encounters every day. But in our books things had different names: majh was not a majh anymore, a kukri had become murghi. The world was not as we had known it before school. Some words were familiar, of course, but to weave them into Urdu sentences was an even higher challenge.

Many of my classmates were first time school goers from their families and couldn’t expect any help at home.  Teachers did try, they explained the meaning of difficult words in Punjabi; they made us sing tables in Punjabi. But they had their own limitations.  The books were in Urdu.  The exams were in Urdu. If you couldn’t read and write in Urdu, you couldn’t learn maths or Islamiat or Muashrti Uloom which was later replaced by Pak studies.

So every year the size of my class kept shrinking. If you are flunking class three, you are justified in thinking that this whole education thing is not going to work for you:  I’ll be better off helping out my parents in the fields. Or learn to become a bus conductor, which for some reason was considered the glamourous career choice for primary school dropouts.

The system was designed to exclude children rather than include them into that notional world of learning. Those of us who survived primary school had some help at home or quickly learned the time-tested technique of ratta. We memorised an essay called Our Cow; we learnt some Quranic verses by heart. Mostly we had no idea what we were reciting or writing. That childhood experience has instilled such fear in my heart that even now when I write a sentence, sometimes I worry that it’s gibberish and doesn’t really capture the idea in my head.

Those of us who finished primary school and went on to Govt MC High School, Okara, faced that language trauma all over again. Now we were being taught a new subject called English. We rattafaoed a, b, c, random passages from Goodbye Mr. Chips, some odd poems. We applied the same technique to sciences; we memorised long chemical equations, maths formulas, the properties of plants and organs. Our heads were full of things that we didn’t understand at all. I am sure in every class there was an odd genius, usually the son of a teacher, who could make sense of it all and tried to help us as well. I always wonder about a way of learning which, out of a class of sixty, makes one student a doctor or a government officer, or a professor and leaves the rest of us confused for life.

In our primary school they had to teach us to write a letter that you were supposed to carry when transporting cattle. Basically a description of the animal and a declaration saying I own this animal and I didn’t steal it. Those of us who rattafaoed the entire letter were the ones who went on to higher studies; those who got stuck in the descriptions of the horns, and the colour of animal’s eyes were sent back to take care of those very animals. Our education has been a bit like the last line of that letter: taakeh sanad rahay aur bawaqt e zaroorat kaam aiyay.  I have never met any one in my life who actually had to write that letter and I am still not sure what that last line means.

The writer is a celebrated novelist and a columnist

Bahawalpur to see steps for better education after elections 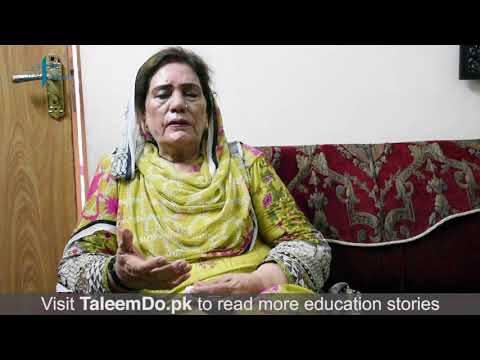 From a small study circle to the world classroom

Were schools better in years gone by? Murtaza Solangi explores.